The cool thing about the Strike Freedom, and I realized this while building the PG, is that it's completely symmetrical, outside of some minor differences in the beam rifles so that they can combine together.

It's an older HG and lacks some of the modern joint technology implemented in more modern HG's (see any of the Unicorn suits) but it's not really that bad.

My biggest problem is the proportions.  The feet seem too big and the face seems kind of childish.  It's hard to say what it is but it doesn't look that fierce to me.  That's something I hope to rectify later.

My standard build practice these days is to cut most of the pieces off the runners (outside of the really small ones that can get lost easily) and combine their respective halves together lightly, just so that they're easier to find later.  Gunpla building has taken on an essence of building a 3d puzzle for me.  After I'm done cutting everything out I sort them by section (legs, waist, torso etc.) and then look at the manual for what PC parts I'm supposed to use.

I want to get as much plastic out of the box as I can so it becomes less confusing for me as time goes on.  I hate searching through the runners looking at the letters wondering if I have the right one or not.  I just do it by eye now.  Easier and faster.

So here are some shots of the runners and some just for the sake of testing out my new camera.  As of this writing I've talked to my friend about what colours she wants to use and I've separated the parts accordingly.  She decides the colours but I'm going to do the scheme.  The next step is to prep the parts for painting. 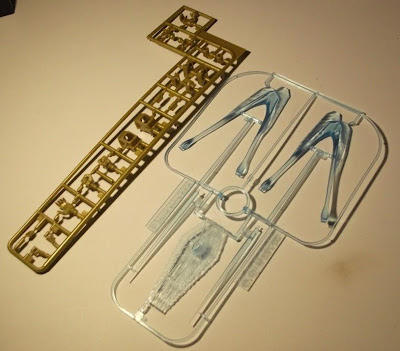 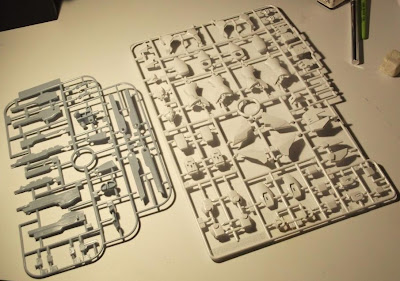 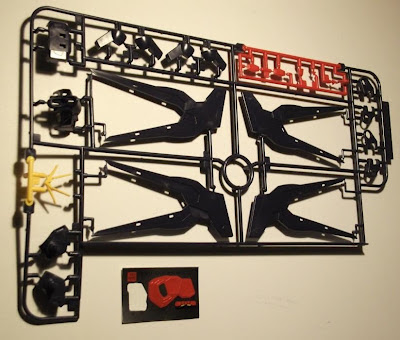 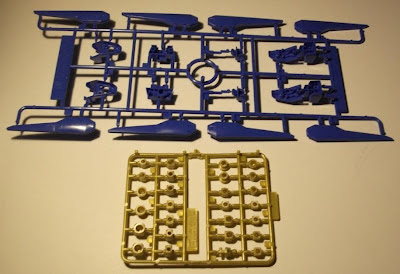 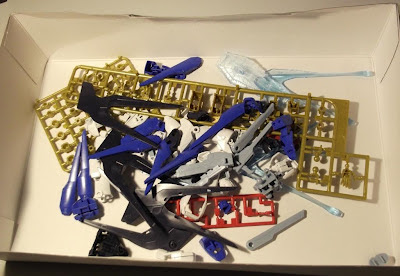 This might be coming out of the blue for a lot of my regular readers but let me explain. I have a Japanese friend who visits me occasionally and she always asks me what Gundams I want so she can bring them when she comes. I told her how expensive they are here and how I don't really want to buy them in Canada anymore.

When we met she said that she used to like watching me make them and didn't know that so much went into them. Since it was something that she's always associated with good times with me and it's something Japanese she really wants me to have them. That and the fact that she's just really kind... She's brought me two Jesta's, the Shenlong (which I actually kind of chose for her. She was born in the year of the dragon.) The Phantasy Star Eleanor model for myself and two for my sister (Shino and Whitill). This time she brought me the Zee Zulu, 1/144 Yellow Submarine hands, Kotobukiya Gattling Gun set and another MG that for now shall remain unnamed.

I orginally asked for the RG Mark.II but the release date was pushed back on the AEUG version and the Titan's version was sold out on the first day. Bad luck. One of the things I asked her to do this time was to think about a suit that she would like to pilot herself. Something she though she could see herself inside. Her original choice was the MG Wing Zero Custom. When she went back to buy it it was sold out. What a dissapointment. I would have loved to have built that one but maybe I'll have the choice to do it sometime down the road. Her second choice was this one. The Strike Freedom. She said she liked it because it was something that needed a 'special' pilot haha.

She had seen me working on the frame of the PG Strike Freedom (at that time I had just finished painting it gold and was fixing the one wing. Sephiroth mode as some of you may remember.) She has since seen the completed suit that I finished during the "Gauntlet" but it didn't register when she picked it out that the PG I was working on and that she was so familiar with was actually the same HG that she picked up. Either way its kind of fitting... And I was glad for the opportunity to see what type of a woman she is from her choice. I am more than happy to make another Strike Freedom but this one will be a monument to her.

I've already built the Gattling gun and the extra hands and have place them on my MG Mark II ver.2 and the Ecopla 1/144 Mark II. They're both great additions and I totally recommend them. The only problem with the hands is that they are very fragile (obviously) and it was kind of pain to get everything to stay in place while I assembled them. As such I used a bit of glue to stiffen them up but it worked to excess bonding the plastic and now I've lost of articulation in the hands! I don't want to fidget with them too much and risk breakage so I'm just content to leave them as they are right now. Totally worth it though, especially for the price.

I had started on the Zee Zulu already and am mid-way through that snap-fit but after I talked with her today I've decided to switch over to the HGSF. She said that I should be doing that one first because she want's to see it quickly haha. I told her that I'd do that one last but she said "ダメ" so I changed my plan for her. She was just joking and didn't expect that I would do that but now she's happier and if she's happy I'm happy. That's probably something most of us men should keep in mind when dealing with women. If you can make them happy and it's not really an issue just do it. That kindness will come back to you later.

Anyways here are some pics and some shots of my new work area. I've decided to combine my laboratories together in order to increase productivity. A true lab is one that you can sleep in and I finally have that now. Again. Haven't really had a setup like this since I left Japan. Refinement. That's what it's all about. 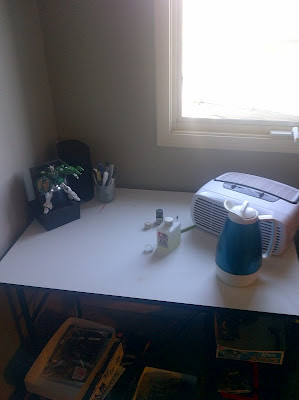 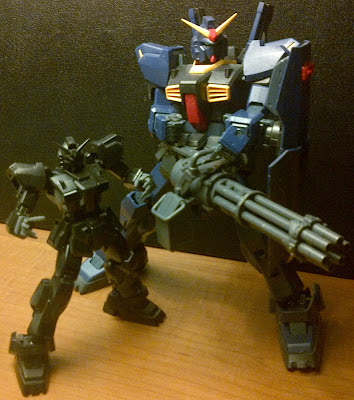 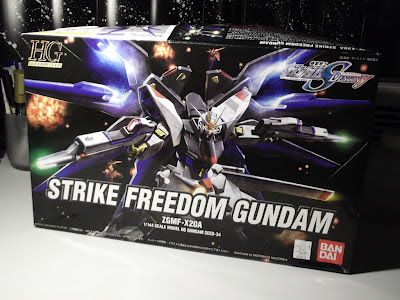 Just got this thing. Fujifilm Finepix C10. Picked it up at Walmart, clearance $50 while I was shopping for a lamp and a fitness magazine (Stacy Keibler AND Sara Underwood?! OMG yes) So I thought why not? I lost my old one in September during a drunken rampage in downtown Toronto. Jumped from rooftop to rooftop in order to get to random house parties. Crazy night.

I can already tell that this camera is better than the GE I bought in Japan at double the price. Funny, buying an American camera in Japan and a Japanese camera in Canada. Blah.

Black, compact, efficient, simple and mostly importantly, quiet. I like it already. Check out the prelim shots. I can get the detail I want with the lighting I want. And it was all cheap. This is hand held. I haven't used the tripod yet. Default settings. 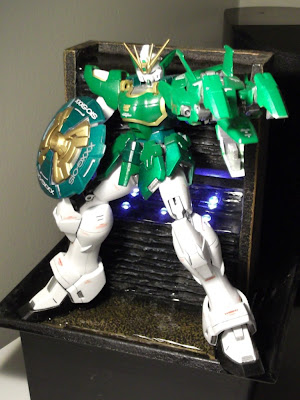 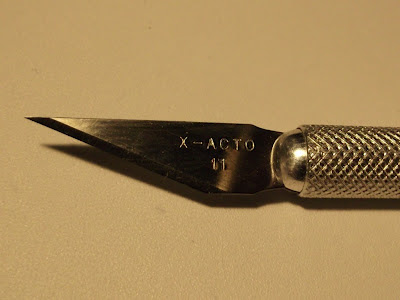 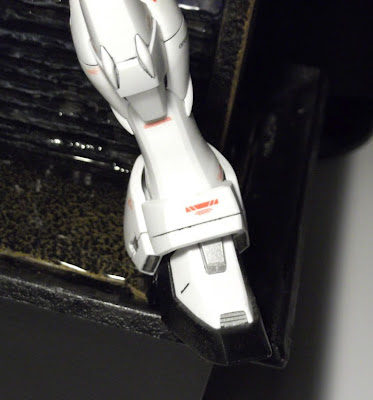 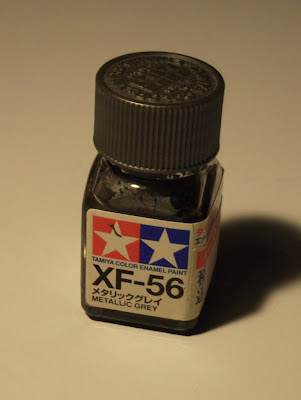