So I picked up this month's Dengeki Hobby, with the 1/144 FG Rasiel attached. If you didn't know, FG in this case does NOT stand for First Grade. It stands for FUROKU, which means 'supplemental' or something of the like. It has the meaning of a grade that is used for attachments to the magazine and boy does it look like one. One panel and practically no moving parts. In order to get this model working like a regular HG it will need a LOT of modifications which they illustrate at length in this magazine.

Although I have a subscription to Hobby Japan I've bought my fair share of Dengeki Hobby's and I really like it as a magazine. I prefer the posters in Dengeki Hobby as opposed to the FIX style posters that are in Hobby Japan. And the modelling spreads are done a bit better too. Hobby Japan edge's Dengeki Hobby out on content though. There's just more stuff in it.

Anyways here are some pics of my Rasiel. This was seriously just a cut and paste job. I didn't even take the time to de-nub properly. Shockingly fast build. It was nice. I could just clean up the lines a bit and paint it as is... but I'm thinking of making this a more involved project just for the sake of learning some new techniques. Rasiel is going on the back burner but I'm glad I have it. Eventually I hope to do it justice and make a simple one panel Furoku Grade model into something much more.

Since Blogger is TOTALLY lame when it comes to pictures, I'm doing this post through Imageshack. Blogger likes to take your uploaded photos and rotate them anyway it sees fit despite the orientation at the time of the uploading. To make matters worse, Blogger does NOT have a "rotate image' function. I made this post with Imageshack and it worked perfectly the first time. Man you'd think they'd be able to sort something as simple as rotating images out in their programing. Ugh... maybe I should have stuck with Wordpress. Oh well. Too late now.

Now onto today's post. Back to work on my GN-X III. Today will deal with the lance.

Test painted without primer to see how it'd look. It's acceptable. Glued the pieces together and let it sit.

I sanded and I repainted to test the seam lock. It was good but I sanded a bit too much so I covered it up with an extra layer of paint.

I'm going for a complete lance without the rifle ports so it's epoxy putty time! It works by combining the pale green and white ones together until its malleable enough to work with.

Puttied. Epoxy on the base and tip, basic putty on the edge of the lance because I wanted to cover up those lines as well.

Shaving the putty off. I tried sanding it with the thicker base but realized it would take a long time to get it uniform, so I shaved it down to it's base surface.

Sanded again. It was pretty good, but I did way more work than I needed to. Basic putty would have done the job a lot faster and cleaner. Live and learn! Tip length extension is negligible.

Primed the lance to test for errors. There were a couple of imperfections.

More basic putty to cover up the trouble spots. Will do a more gentle sanding job to get it the way I want.

mg impulse 001
Originally uploaded by Busterbeam
Just a scan of the box art. I was going to destroy it but decided to put it up on my wall instead. It'll give my room some colour.
at 9:01 AM No comments: Links to this post I've always had a special place in my heart for this suit, simply because it really is the first mobile suit ever made. Everything started from the Zaku I. This a severely modifified version that won 2nd place in this years Hobby Japan ORA-ZAKU contest. Of course 1st place was great but I liked this one more simply because of the drastic customizatoins. Built from a Char's Zaku v.2 base.

Primed my seam lined parts to check for errors. The results speak for themselves. Some good, some bad, but mostly on the good side. Probably won't go back to fix the errors but will just cover it up with a couple coats of paint. Well... try to do that at least. 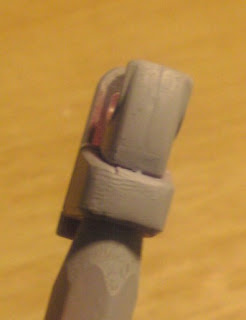 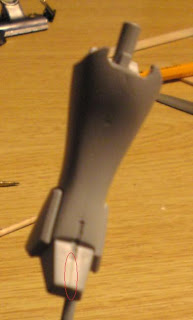 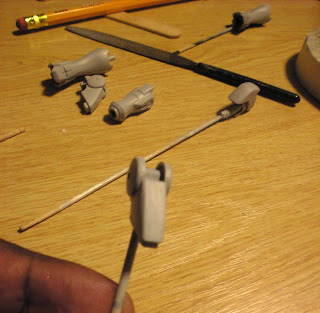 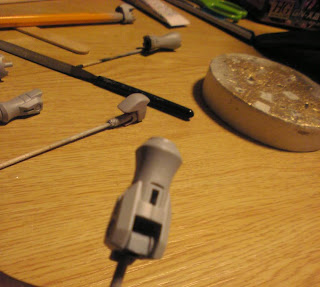 Yeah I know it's ancient, so why am I putting a scan of this up now? Well I'm throwing away some of my old boxes and wanted to scan some of the art while I have the chance as I won't be able to look at it again. This project hasn't been abandoned but it has been put on hiatus. I don't know when I'll finish it but I'm confident that it will be done someday. Anyone interested in my WIP can click on the link in the sidebar. High res scan for this work of art. I'm going to steal some of these ideas for my own MGIJ . The images speak for themselves. I really can't say enough about how much I love this kit... really... it's bordering on obsession. This kit sold amazingly well. I was really shocked because I didn't expect it to be that popular. I think it sold out on the day of it's release because there were only a few left when I got there and I think that was the day it was released. Anyway here's a scan from this months Hobby Japan. I didn't go for the front page spread because I wanted to show a mix of things; the modding, the weapons, the colour changes and some of the poses. I had a chance to play with this at the Gundam Bar a couple of days ago and I liked it. I certainly like it more than Dynames but... still it's not really my thing. Arios on the other hand... That looks really sweet. I love it's head! But more on that later.

Finally all major construction operations are complete. Now for the hard part. Design. It'll have to wait though. I'm going back to working on my GN-X III for a little while.

Also... Congratulations to Senator Barack Obama and all his supporters. I'm so happy for all of you. Happy for myself too. I've been waiting for this moment for a long time. 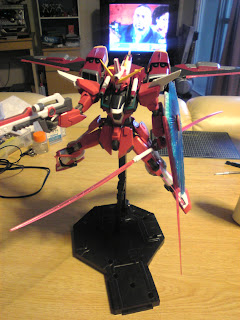 I've loved this suit since I first set eyes on it. MAHQ calls it Perfect Gundam III. It's GFF #0040 and it's the poster insert for Hobby Japan Dec. 2008. Yes I'm putting this poster up in my room. My first one to take out and put up actually. I like it that much so I thought I'd share. But just for the record, I modified the contrast and colours a bit so it would show up clearer on the net. The poster's colours are a bit lighter than how it appears here.

I don't know much about Kyoshiro Maniax but apparently it's a manga that used re-designed U.C. suits in a kind of G Gundam type tournament fight thing for the younger audience. These designs only appeared in manga form but now Katoki Hajime has re-done the re-designs and has made GFF versions for some of them. I like how they look personally. Especially the FA Gundam. Red Warrior will be released this month for 5575 yen. The title MS of this month's Hobby Japan (and also Dengeki Hobby), it really is quite impressive, but a bit much for me. When I first saw the Avalanche upgrade for the Exia I thought it was a bit much and this one provoked the same response from me. I was like like... WOW. That buster sword looks huge. Like the Blue Frame 2nd L but better... but at the same time not, because at least that changed into a gatling gun and a back pack. This one just sits on the shoulder. Throws the whole thing off balance if you ask me but... no doubt this is going to become very popular. This is only a conversation but I'm predicting that Bandai is going to make a mass produced version of this down the road for our consumption. They'd sell a lot of units with a minimal amount of work. Watch for it. It's not available yet but it will be eventually I'm sure.

Coincidentally, this, my 100th post on the board is about... 00 Gundam. How about that! So to celebrate that... I'm going to change the colours a bit. The dark background and light letters were messing up my eyes o_O