All done and it was a lot of fun.  Prepping the parts wasn't so enjoyable but it has to be done.  Nubs all over my clothes.  On the desk.  In the box.  On the table.  On the carpet.  Sanding.  Blah.  Messy.

But it was a nice opportunity to enjoy listening to music, talking to friends or family, watching stuff on TV.  Sometimes I wonder if it's not the Gundam's so much as being able to do the other things at the same time.

No way.  It's the Gundam's!  But it really is such a relaxing hobby sometimes...  I've learned a lot of stuff while building Gundam's and goodness knows it helps with women because they can just keep talking and I can actually pay attention to what they're saying because I'm doing something else at the same time.  Weird how that works.  Can't give a woman your full attention.  That's just ridiculous! (jk to all my female readers.)

Anyways, onward!  To the pics!

After the cleaning I brought out all the parts and organized them by section.  Guess work but when you've built as many Gundam's as I have this part is actually pretty easy. 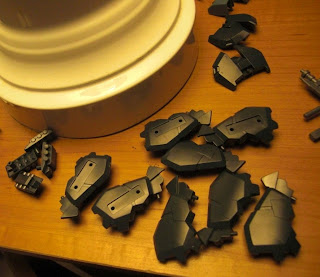 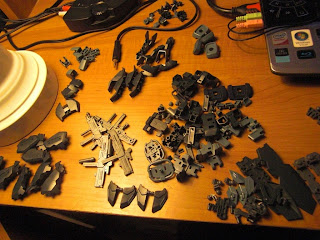 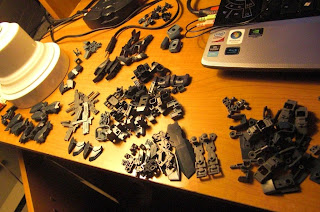 Alright time to get started. For this build I've decided to just cut everything off of the runners first and then sort out the details later.  Here are shots of all the parts plus the runners they came from. 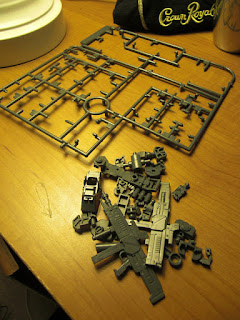 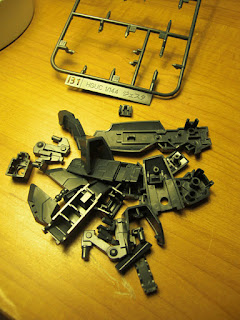 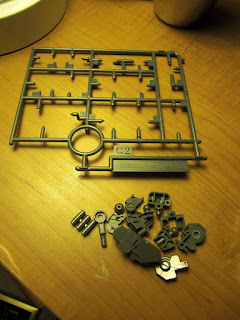 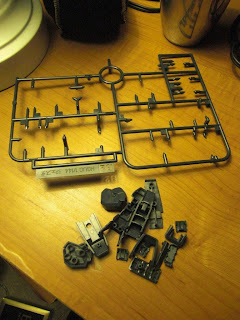 I did do a fair bit of work tonight while watching a special about Morgan Freeman's life.  Quite inspirational.  You know that guy didn't really become successful until he was in his 50's!  I know all of us are relatively young so that just goes to show you... life can have a lot in store down the road.  Our best days might actually be ahead of us!

Yep it's been that long already.  I won't make some long winded post this time...  Anyone whose been reading this blog already knows most of the story but here's a quick recap of the past year of Plamo Addiction.  Sorry no links.  It's all there on the sidebar if you want to know the details.

Jan - My last of month of 8 years in Japan.  It was a hard and busy time but an amazing one.  Packing up my kits and posters preparing them for the voyage across the Pacific to meet relatives they've never seen before.  It was also the last time I met fellow Gunplars ASM and Gaigun and had a great time in Osaka enjoying many beverages, food, discussions and all things Gundam.  I'd bought the PGSF the month before and continued work on that up until it was time to leave.  I bought my last few kits (MG Mk.II ver.2, GN Sword IV Full Saber Kit, HGUC ZGok Experiment, HG Nobel, 1/144 Nataku, ANA OO a gift from ASM and Graham's Union Flag, a gift from Gaigun) got rid of as much unnecessary plastic as I could and finally left the Land of the Rising Sun, a place which I'd called home for yearly a decade!  さようなら and 本当にありがとうございました!  Looking back on it getting that many kits in a month, considering what I paid was truly luxurious.  I had no idea how much my life would change in that department.

Feb - I bought the new HGUC GM Custom at Narita on my way back.  The last Gundam that I'd buy with my own hands and money.  The end of an era.  I did one of my first reviews if not my first actual proper one.  I had time and space now living back at home.  A lot of time and space but how to use them?  My Gundam's ended up being absorbed into my mom's doll collection while I sorted it all out.  I didn't do much Gunpla but I kept following the news and did a couple back posts on the PGSF and some other smaller kits, HGUC Sinanju, RG RX-78-2, ANA 00 and RX-78-2 Gundam while also talking about new/upcoming releases, MG Epyon, Shenlong and HGUC Dreissen which was a lovely surprise for me.

March - Decided to follow through on the polling results and picked the MG Exia as one of the next kits that I'd work on.

And you know what... I'm just going to stop there.  Too much really happened to recap.  This post will read like a boring novel if I keep going.  And I don't want to bore myself.  Because if I do that I'll stop and nothing will happen.  (See fall posts for 2011)

Which brings me to something I want to talk about now for this 4th year anniversary post.  Unfinished business and finishing it.

I'm going to try and do that.  Progress has been slow.  A lot has happened.  And not just to me.  A lot of my fellow bloggers have slowed down or all but disappeared.  Things have changed.  People have moved on with their lives.  Children.  School.  Work.  Moving.  Natural disasters.  Accidents.  Deaths.  Births.  Life.

Man I've been gone for a while.  Forgot what it was like to write again.  Well let's see if I can't get a feel for this blogging thing again.

No longer a blog about Japanese experiences with this hobby.  Now we do it entirely from North America.  Think I've got a handle on how to do it here now.  It's so nice to have the space to spread the army out finally.  No one has to stay in boxes anymore.  One mech at a time... they have have a place now and I'm happy about that.

But let's start this new year in my blog and in my Gunpla life with a project that I've been looking forward to for some time.

Aas is my custom when starting a new build, let us first bring out the honour guard to welcome our new brothers into our midst.  Every project has an overseer and for this it is the HGUC Unicorn Gundam.  It's only right.  The Jesta units were made from Unicorn data to protect and supplement that suit.  I now also have a lovely Phatasy Star maid-bot so she will probably be present during the sanding/cutting/cleaning process.  Thank you Elenor.  Your first job.

Also present are Hazel and GM Quel as brother units and also as predecessors to the Jesta design and scheme.  We always give respect to those that came before us here. 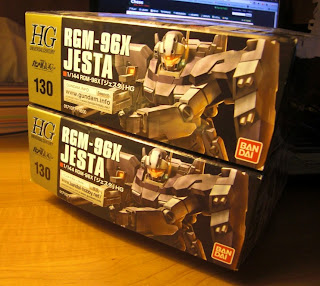 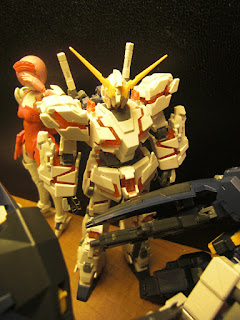 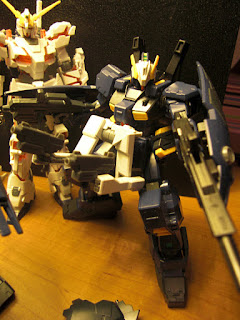 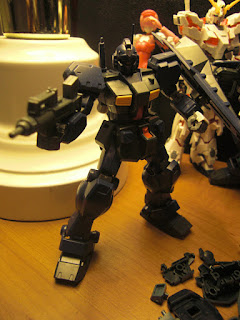 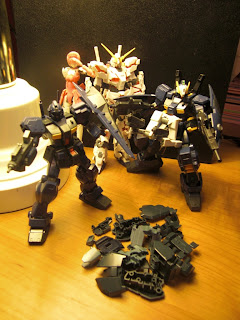 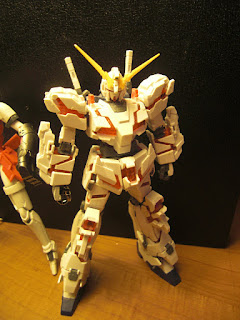 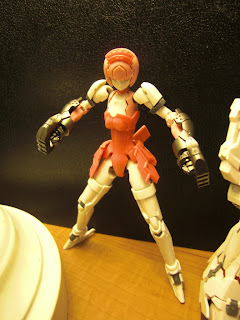