I suppose it's appropriate. I do kind of feel like I'm starting over.

At the height of my Gunpla career I was living in Japan and working full time. I think having a full time job helped with my Gunpla. I had a routine and I was always working on something. Be it assembling a new kit or painting another one. I'd do a little bit each night before I went to sleep. Kind of a thing to relax and unwind a bit before wrapping up the day.

Yet sometimes it did the exact opposite. Sometimes I'd get like a fever and really want to finish something and I'd just keep going and the time would fly by. That's the dangerous side of this I guess. In my case I can't finish until the entire section I've allotted for myself is complete. Like a checkpoint. And then after that I'd want to re-assemble things to see how it looks... and then I'd want to do a bit more and on and on. It can be brutal.

During the past year it's been pretty crazy. A lot of ups and downs and getting used to things and re-acclimation and whatever. Life and Gunpla are intertwined. At least in my case and my life is constantly changing so naturally the Gunpla follows suit. Actually, let's not say "changing". Let's say "evolving". Which brings me to my next project. I've decide that it's going to be the 1/100 HG Endless Waltz Heavyarms Custom.

Now from looking at this picture I can already tell a couple of things. They left some stuff out that you can find in the MG version of this. Specifically all the missile pods on the waist. They just aren't on this model.

I'll be starting a new job soon. It's my first full time job since I've been back... so hopefully it will bring a return of normalcy and routine back to my life. I'm been living for a year as a Ronin and it's kind of nice to have a master to serve again. I know it sounds strange to say that but there it is. Plus this is my first real job I've had in my home country. I hope everything works out but I'm nothing if not flexible.

Anyway after seeing all the images on the net recently of the new MG Heavyarms, I decided to pull my own out and take a look at it again. It kind of symbolizes what's been going on with me recently. Not quite complete. Not new. Semi discarded... very cheap but I'll find a way to make the most of it. Making 1 and 1 = 3 somehow. Realize what you have and make the most of it instead of always striving for the next and newest thing. Flies in the face of convention I know but consider it... This was isn't for everyone but it is for me.  I like this "Mecha Recycling". In the meantime I've been transporting the Gundams that I re-assemble to the display area in the basement. That's basically the process. There are only a few left in my room now.

Here are my sword fighters. 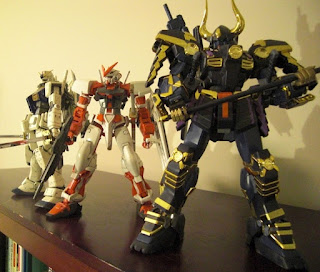 Asianskill1 this is all your fault.  If I hadn't seen your MG Heavyarms I probably wouldn't have went downstairs to grab my own. 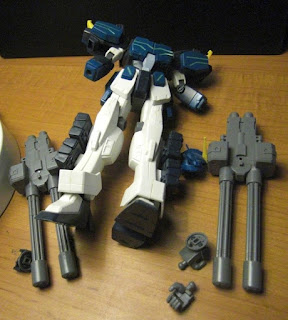 I bought this guy when I was about 20 while in Buffalo, New York.  I was at a shop called Target.  We don't have those in Canada but apparently that's all about the change next month.  I got him for a really good price too.  Comparable to what I'd pay in Japan... but that was a different time.  A different era economically.

At first I was just going to do a simple clean up of this guy.  As in dust him off, re-assemble, pose and put him in the display case but as I was working with him I realized that it'd be very simple to make him look really good.  My skills now are light years beyond what I knew when I was 20.

This guy is just an HG and an old one at that.  It'd be very easy to disassemble him and spruce him up in just about every area.  Joint range, seam lines, details, panel lines and naturally I'm going to recolour him.  And yes... face fabrication.

I look at him with new, older and wiser eyes now.  Eyes that have evolved with time and experience.  New but old.  Old but new again.  Maybe some things are just timeless

Ah... I'm adrift in time. I just finished FFXIII-2 today.  What a time traveling mind **** that was!  But such a beautiful beautiful game!  Actually since I'm here let me drop some candy for the fans.

Anyway since that's done and I destroyed Skyrim I have nothing really to play until Mass Effect 3.  Which I'll get for sure but maybe after this guy is done.  No need to rush.  The games will always be there later. (Man I am getting old.)

But for now I just want to have fun with Gunpla again.  I don't care so much about what happened in the past.  The past will always be there but the present demands your attention.

It's time to just live in the moment and work towards the goals in the future.  Starting here.

Trying to scan these things and I want a proper archive of them here.  Blogger won't let me upload the full file size (3200x2400) and re-sizes it down to 1600x1200.  I don't really want to keep them on my Flickr because access to that is temporary.  Oh well.  I'll think of something. 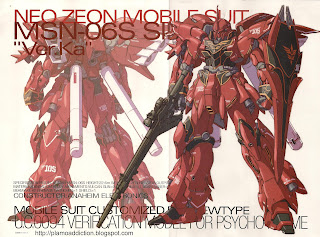 Granted I’m not always doing gunpla stuff... I spent most of my time looking at other people's work but gunpla has definitely been a consistent thing during the past year. Off and on. There’s always something to work on.

Recently it’s been trying to improve my photo taking ability and that really hasn’t worked out so well due to my lighting situation and generally how I like to take shots. I generally do it with one lamp light and it tends to flood the shot and cause some saturation making things 'glow'. Maybe there are some settings on my camera for it but... yeah.

My talent is in making models not photographing them. I can’t be bothered with the setup. I’m kind of a guerrilla photographer like that. I want to get the angles, the poses, keep my hands steady and go for it. I don't like spending a lot of time setting things up. It’s hard to get the angles I want with a tripod (even though I have one) so it all comes down to a cool hand in my case. What makes matters worse is that I generally shoot low light shots which just compounds the damage. What to do... Oh well.

Here’s a shot that I quite like of the White Demon and Ebon Enforcer, plus some shots of Elenor and Shino combination mode I called Elenor Assault Setting. Painting will be happening on both kits sooner than later. My sister said she wants my pink armour parts because she wants to go for purple and pink would be a good base for that. If I can keep the blue parts I may keep most of it as is and just do some highlights, detailing and panel lining. We're both gonna sit on the idea for a bit. 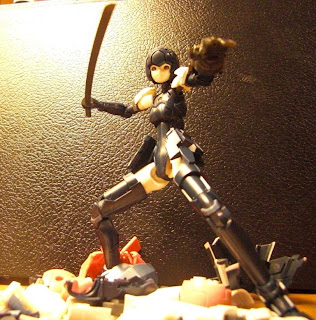 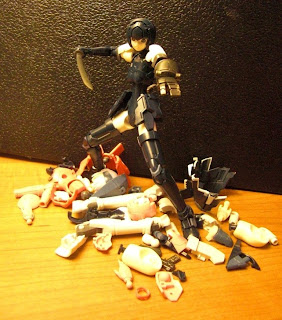