I have to admit that I've been taken by surprise.  I didn't expect that I would get into another Gundam series for while and certainly not this one.  I missed AGE.  I didn't bother.  Wasn't really feeling it.  I enjoyed 00 a lot.  I thought I'd be good for a while.  I watched Beginners G.  It was OK.  I liked the fact that they brought back some old suits.  This is one of the reasons why I really like this Build Fighters series.  Suits that never even made it into anime can be seen in this series and that's great.  Plus the modifications.  But I didn't like Beginning G that much.  White Sazabi.  Sky Blue Zaku.  The Zaku F2000 was cool.  I picked that one up.

However THIS one on the other hand!  I was really moved by this episode especially by Mao.  It brings a lot of things together.  If you haven't seen it yet take a look.  Things can change but I can tell you now... I'm invested.  I think it will just get better.  It's one of my favourite series in a long time.  It's cheesy and predictable sometimes and treads all to familiar ground.  They won't be deviating from the "formula" much here but I'm entertained.  And... it's about me!  It's about us!  How can it really get any better?  They decided to make an anime about Gundam fans!  It brings a lot of things in that I didn't expect and I felt things that I didn't think I'd feel.

And most importantly... somehow this show has renewed my passion in Gunpla and has caused me to think about it in different ways.  I know this is all contrived and I'm falling into the merchandising trap that's been laid out for me but look at me.  Walking right in with my eyes wide open.  And loving it.  Because for me this is quality.  They made something really good here with something for everyone.  You don't even have to be a Gundam fan to enjoy it but if you're willing to learn about it like the young female character is here it can be fun for you too.  Maybe :)  This show resonated a lot with me on many levels.  I was surprised at how closely some of the situations mirrored my own life, experiences and thoughts.

There are always lessons to be learned in this show too and I also like that.  Similar to G.I. Joe with, "Now you know and knowing is half the battle." , Ral always has some wisdom in this program.

"The goddess of victory won't smile on those who neglect their daily efforts!" 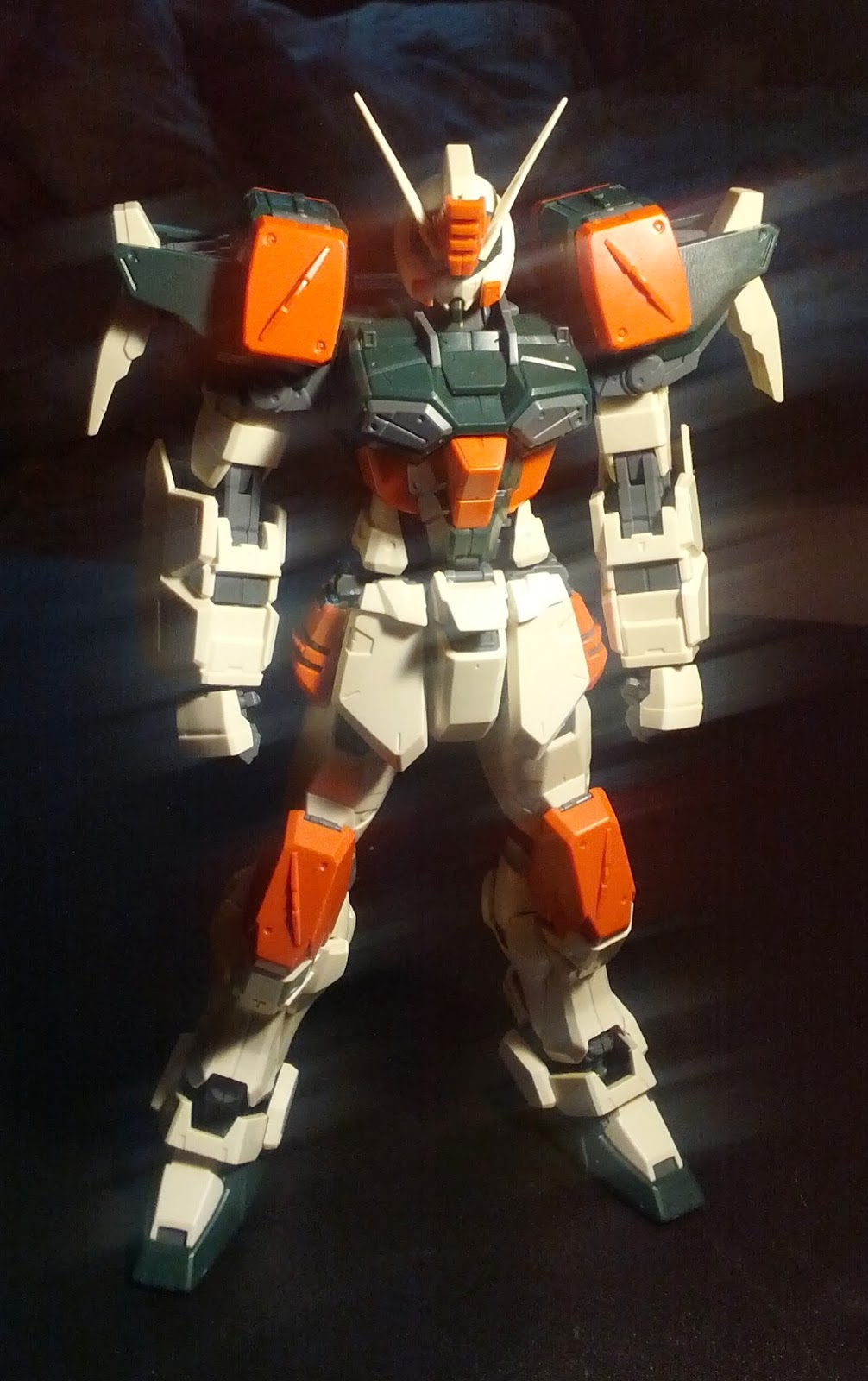 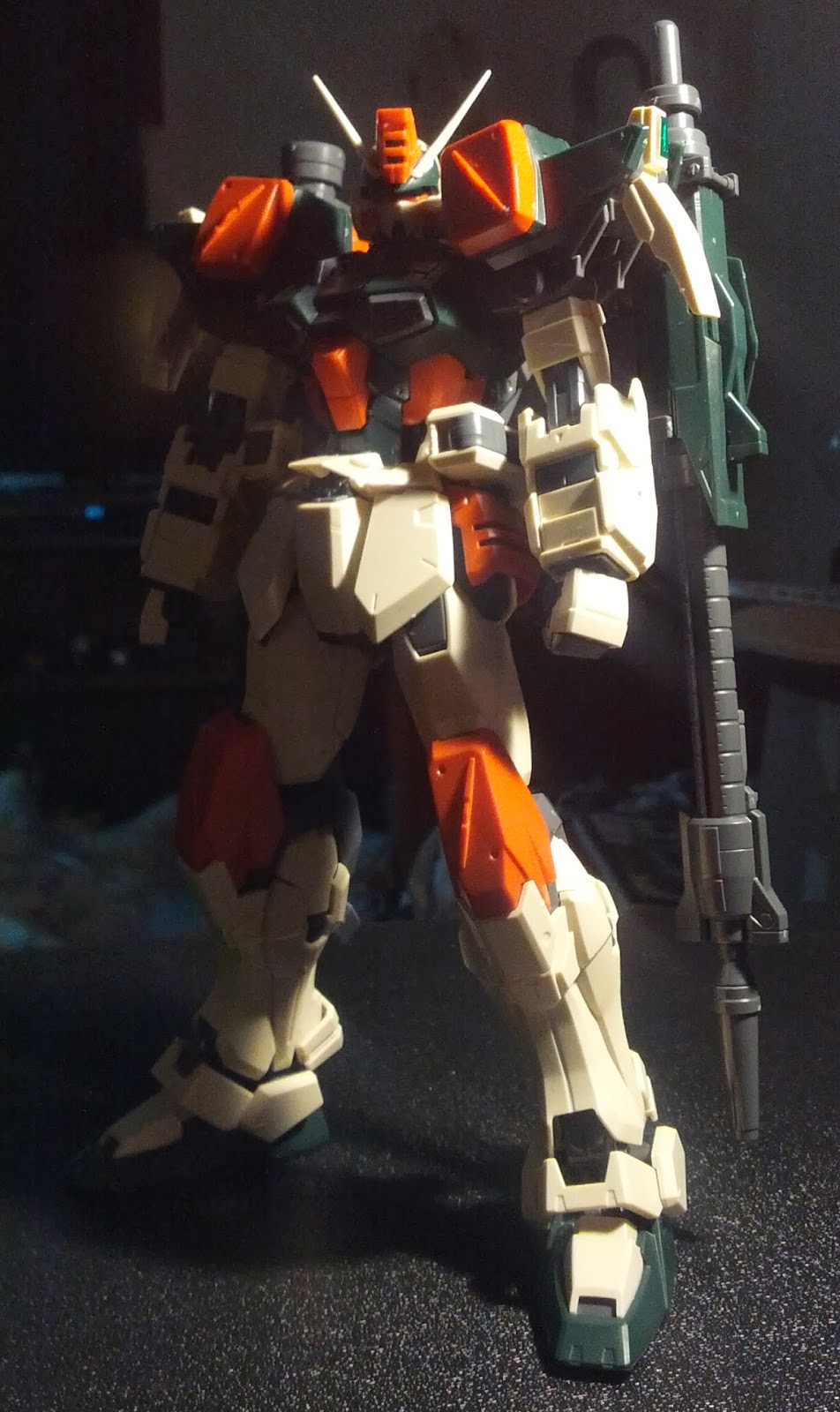 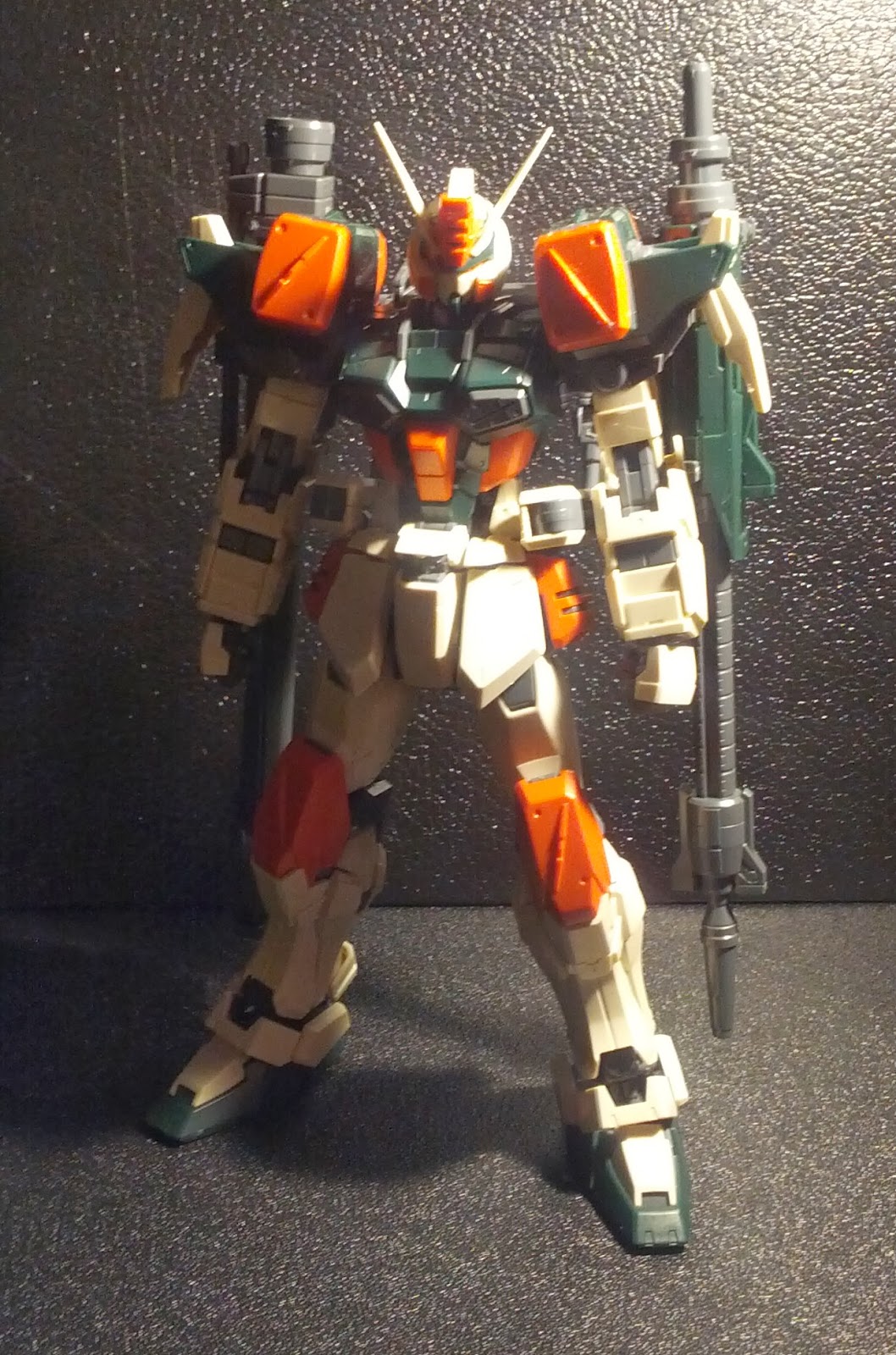 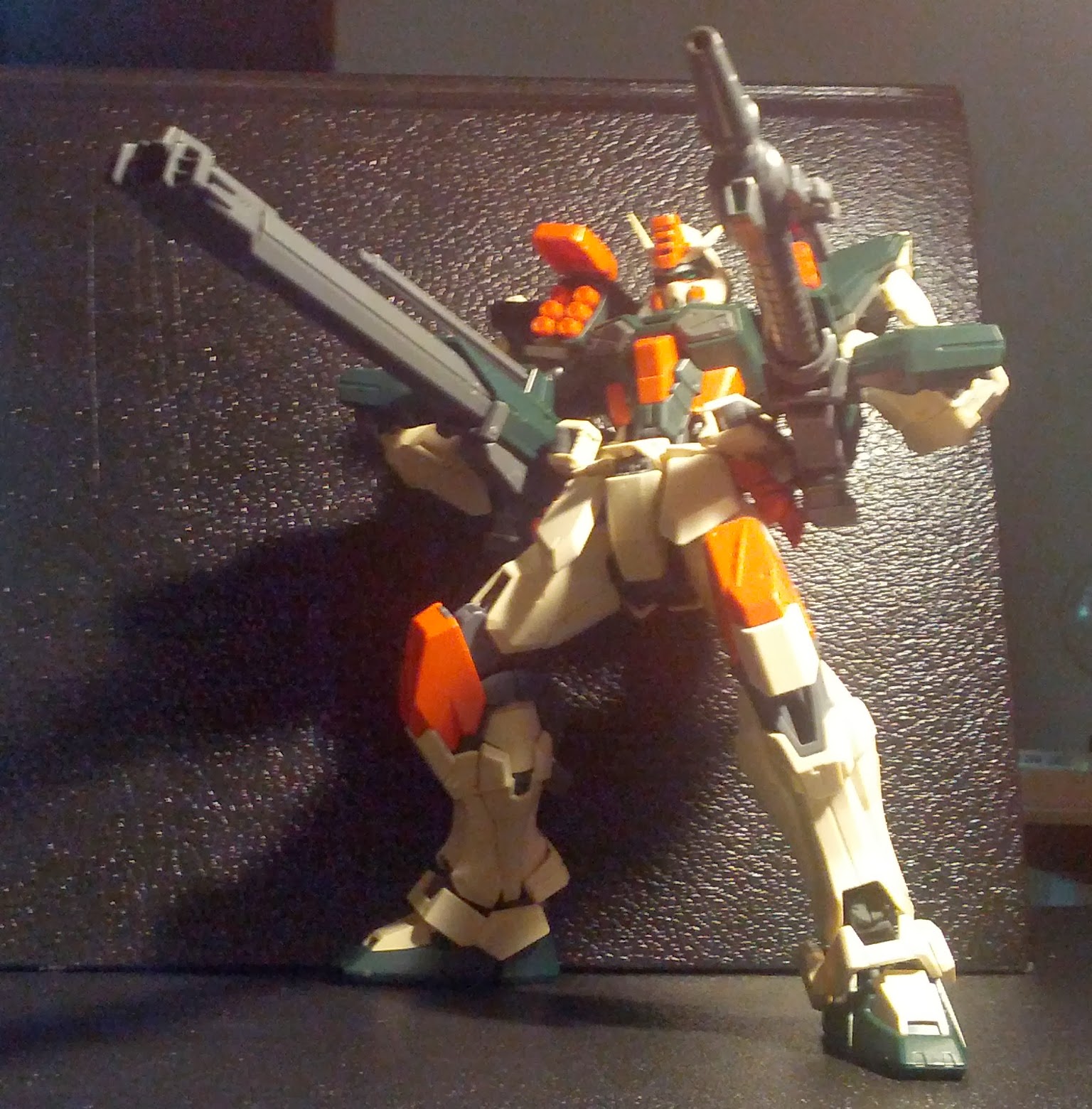 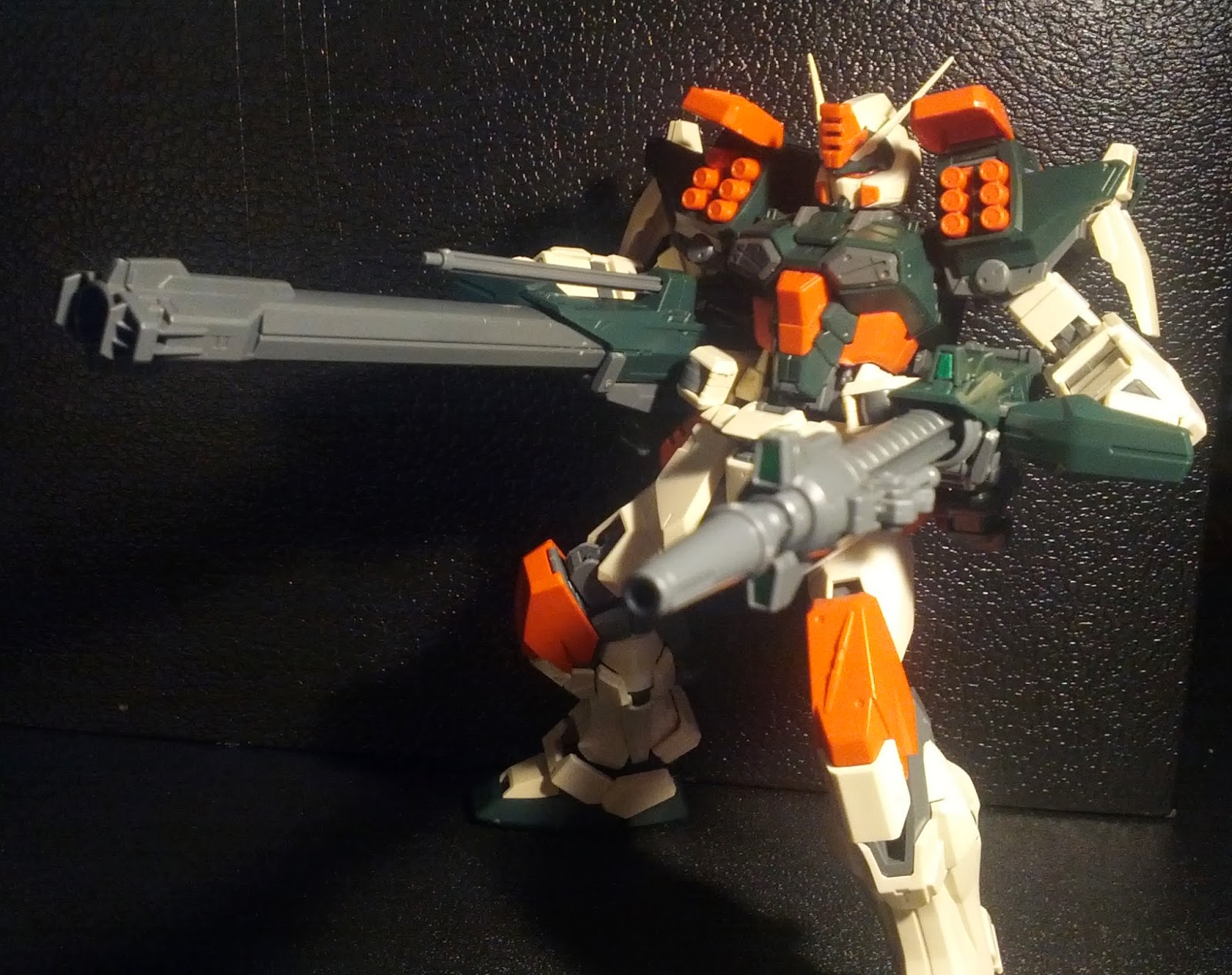 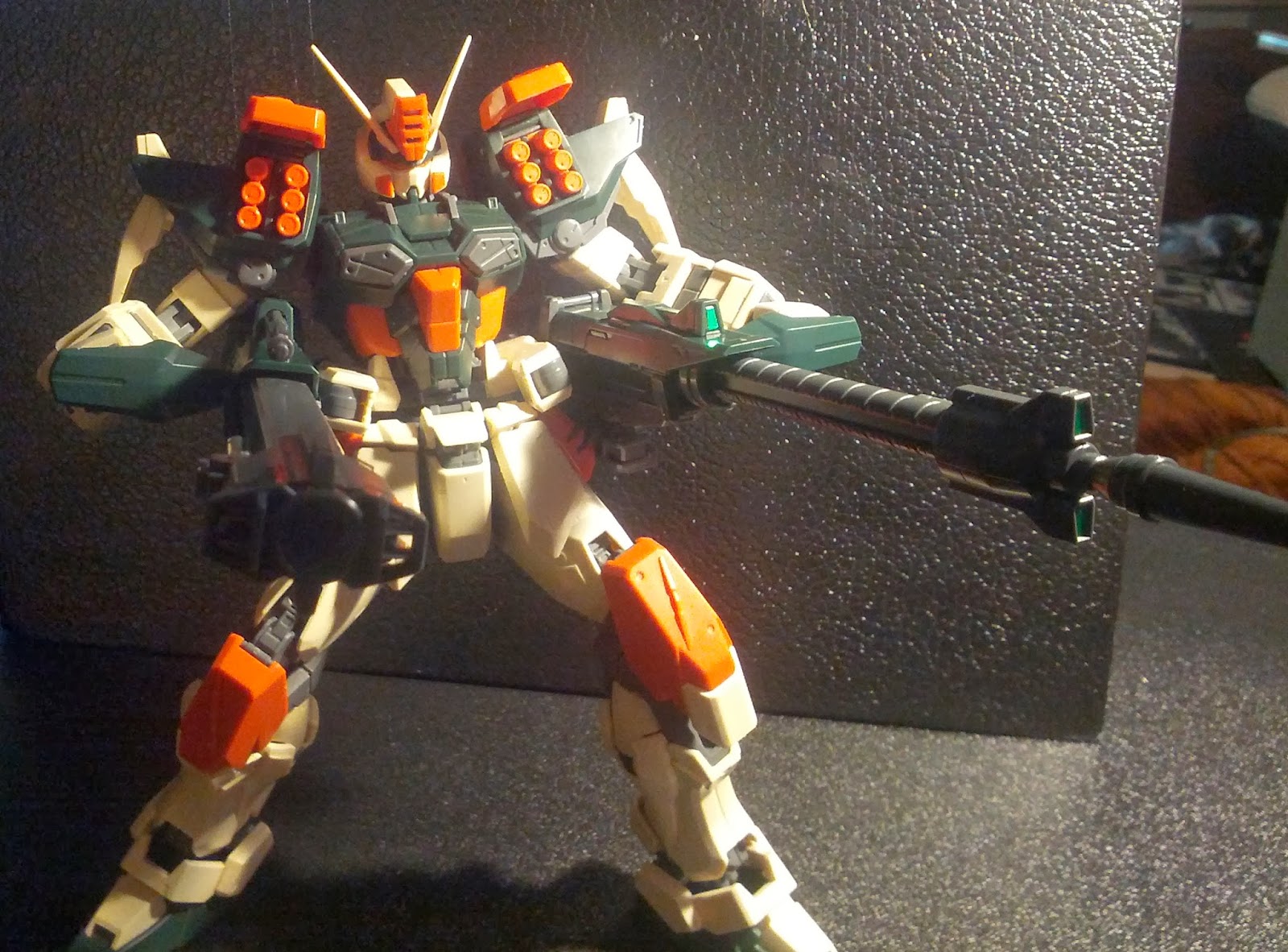 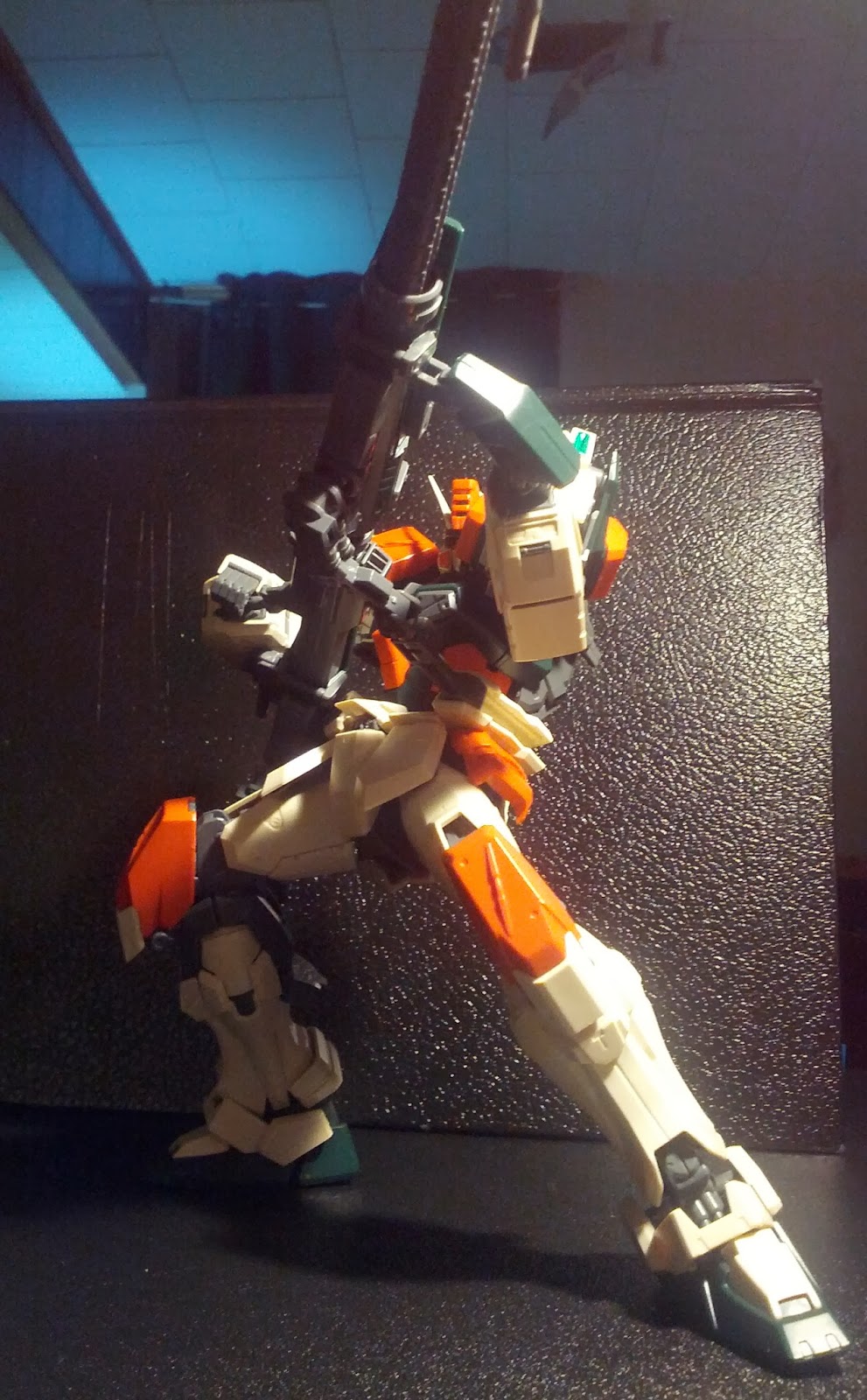 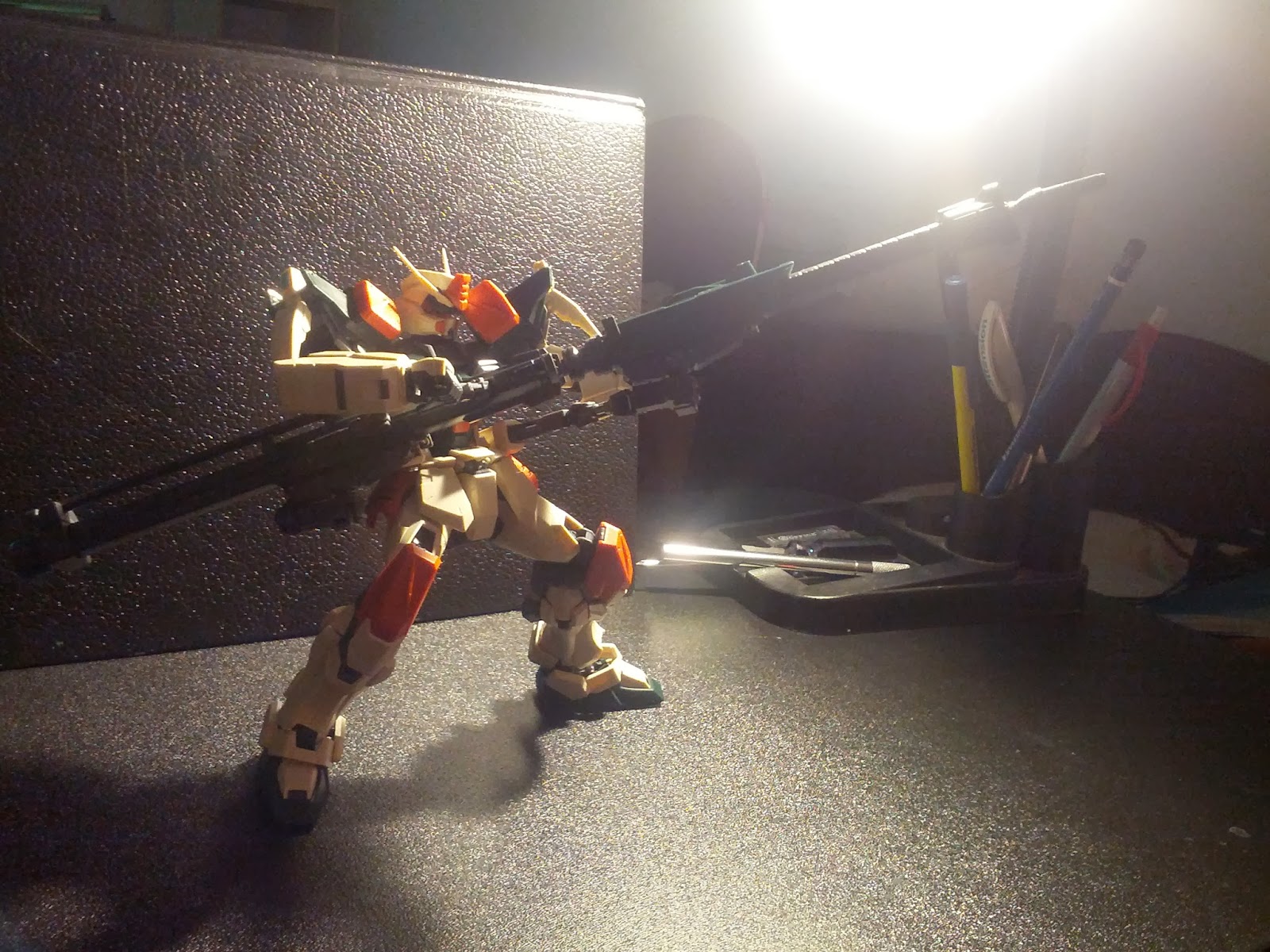 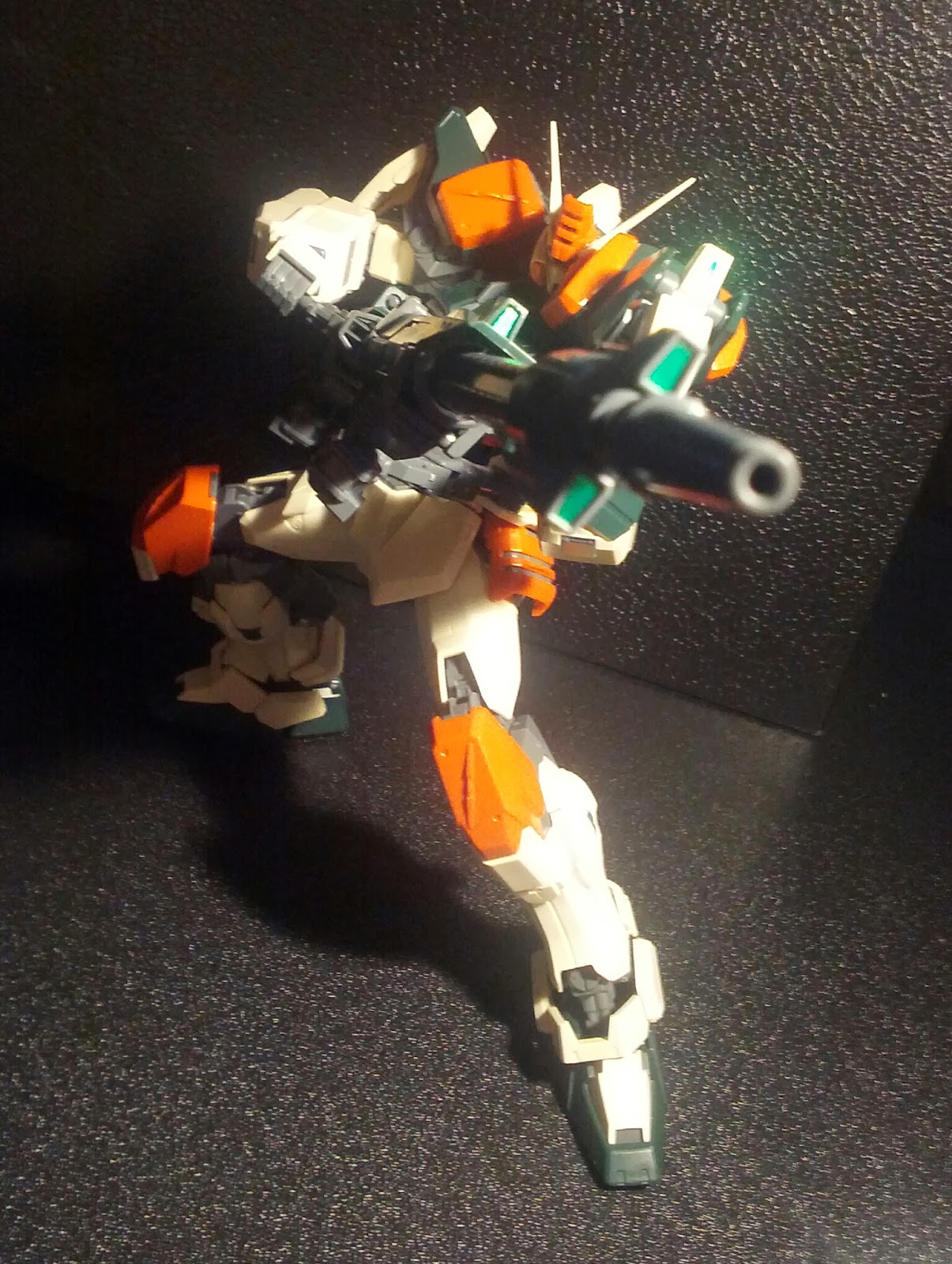 Very fun kit and definitely one of my favourite designs.  I'm really glad that I have this in the collection now. It has absolutely no close combat weapons. It's just straight long range artillery! This suit will go in combination with my Duel Gundam! I really like the designs of these new Seed kits. I've always been a bit fan of the "X-Frame". I'd actually like to see a Red, Blue and Yellow Frame based on these new models but it won't happen.

Anyway great kit! The launchers are a bit troublesome to move around but with a design like this it's to be expected.  This was the last unit needed for my "SEED Force"  MG's Infinite Justice, Duel, Buster, Impulse and Red Frame.
at 8:38 PM No comments: Links to this post

I saw a picture a while ago and decided that I needed the MG Deathscythe Hell. I was never a huge fan of the suit itself but I always thought that it was cool. I mean it has a giant beam scythe. What other suit has that? It's hard to beat and also very iconic in its own right.

According to MAHQ the Deathscythe's only fixed armament and only ranged weapon is the weak anti infantry head vulcans. I don't think they serve much of a purpose outside of that. I have seen them used to shoot down rockets and for harassment but they don't do much damage (edit - the kind Plamo Addicts at my fb page have let me know otherwise.  They're for shooting out camera's too.  Thanks guys!). So it's not a long range suit at all. Close quarters melee combat. It doesn't even have beam sabres. The scythe or nothing basically. It's got some sharp forearm mounted shields and spikes everywhere but that's it really. So this suit is meant to cover ground quickly and cut the enemy down within spitting distance.

Impractical. Vain. Cosmetic. And I love it. So what was it that made me fall in love with the suit? This.

I know it's a kit bash of the Wing and Deathscythe together but it's the darkness of the piece that attracted me to it. It's the scythe. Everything is great. The colouring, the combinations, the paint job, the gradients, the subtlety and the totally awesome custom stand but it's the scythe that brings it all together and gives this piece some real attitude, character and charisma. There were others as well.

My vision of the Deathscythe is something like this. 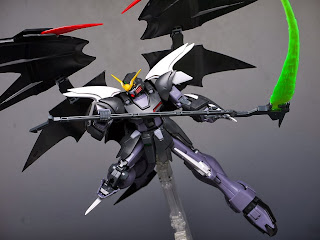 There is a high chance that I will paint this kit later. I want to pair it up with the MG Wing Zero Custom in a Life and Death motif but stages... This needs to be built first so let's get on with it. 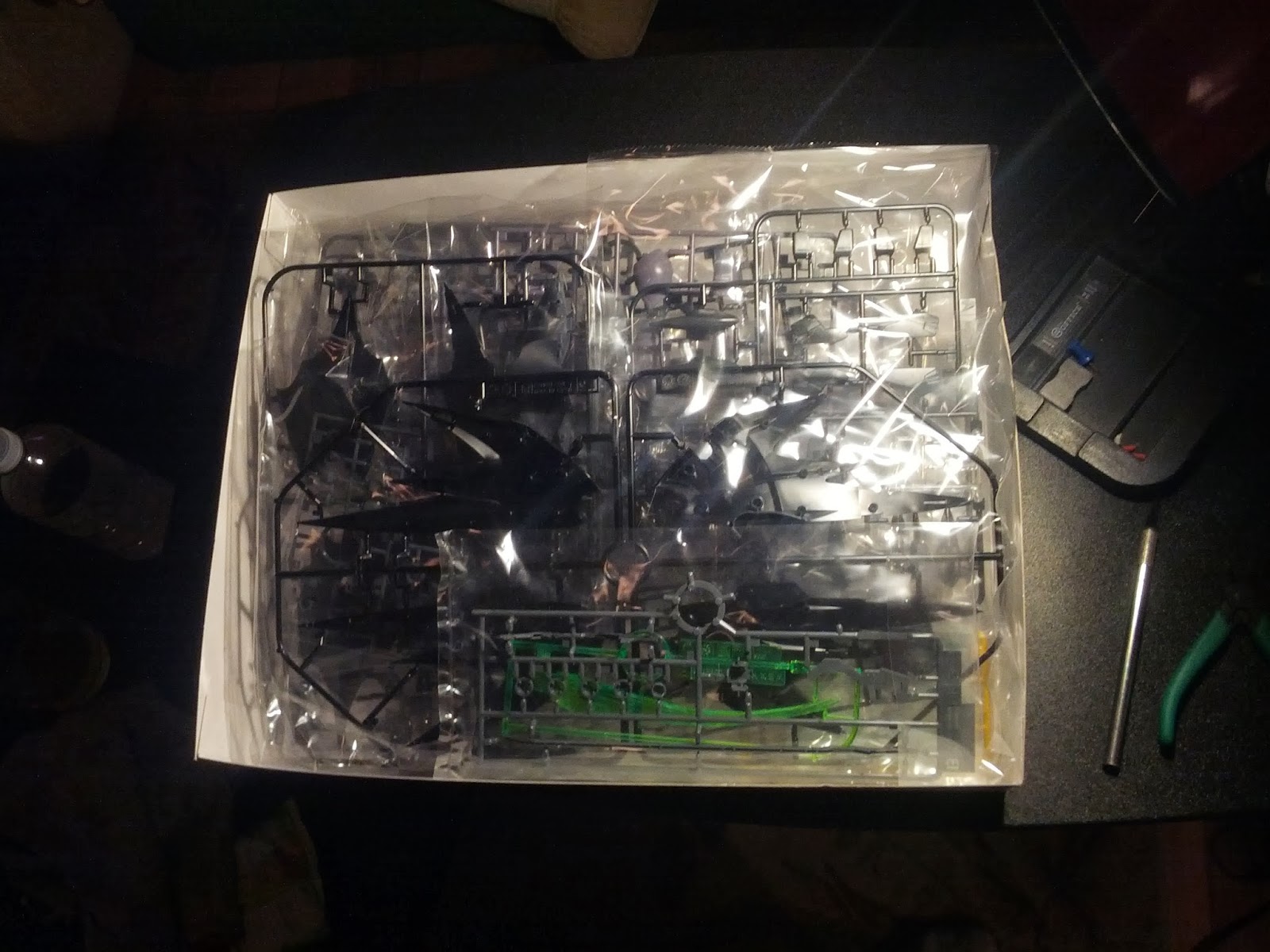 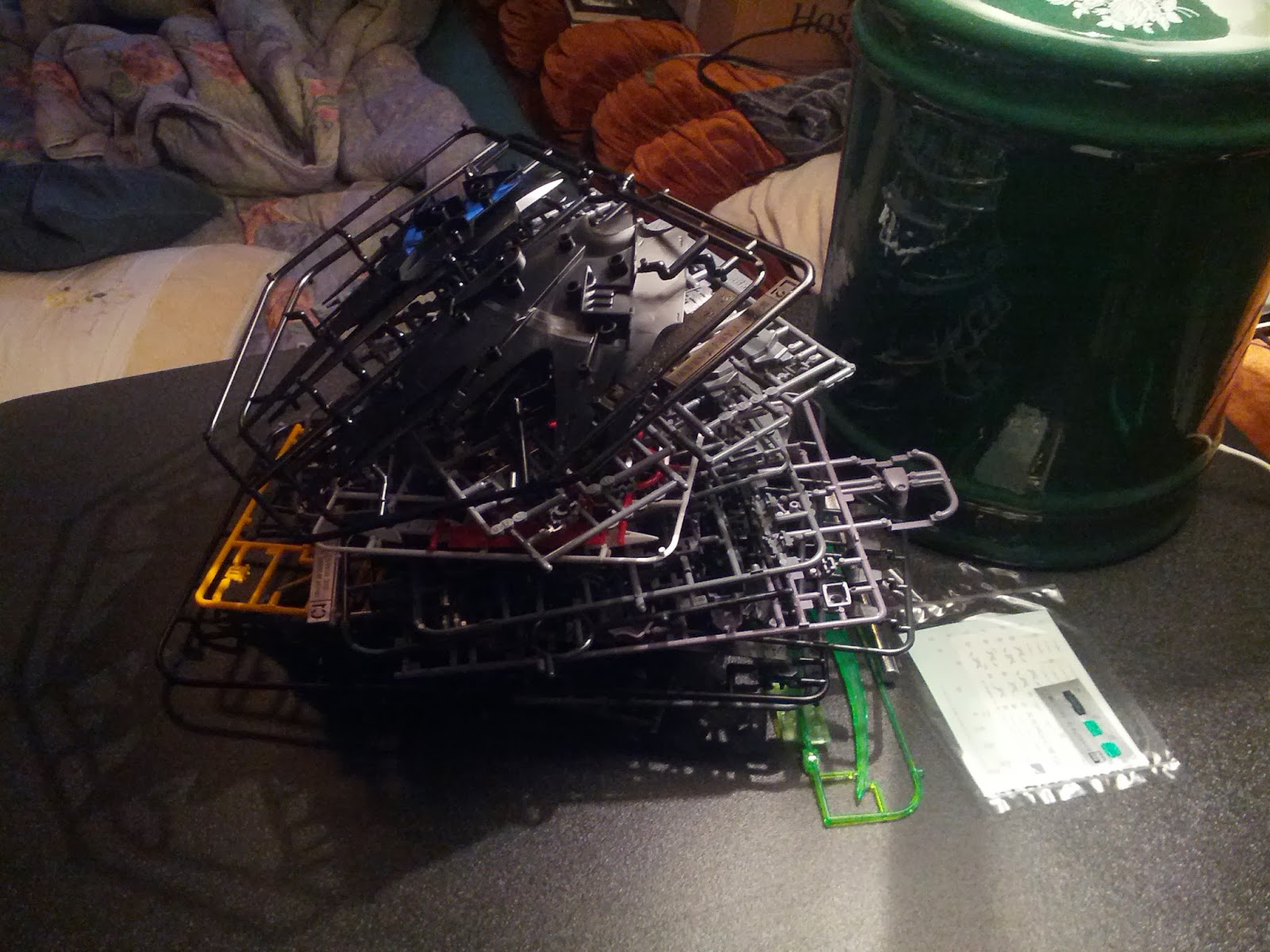 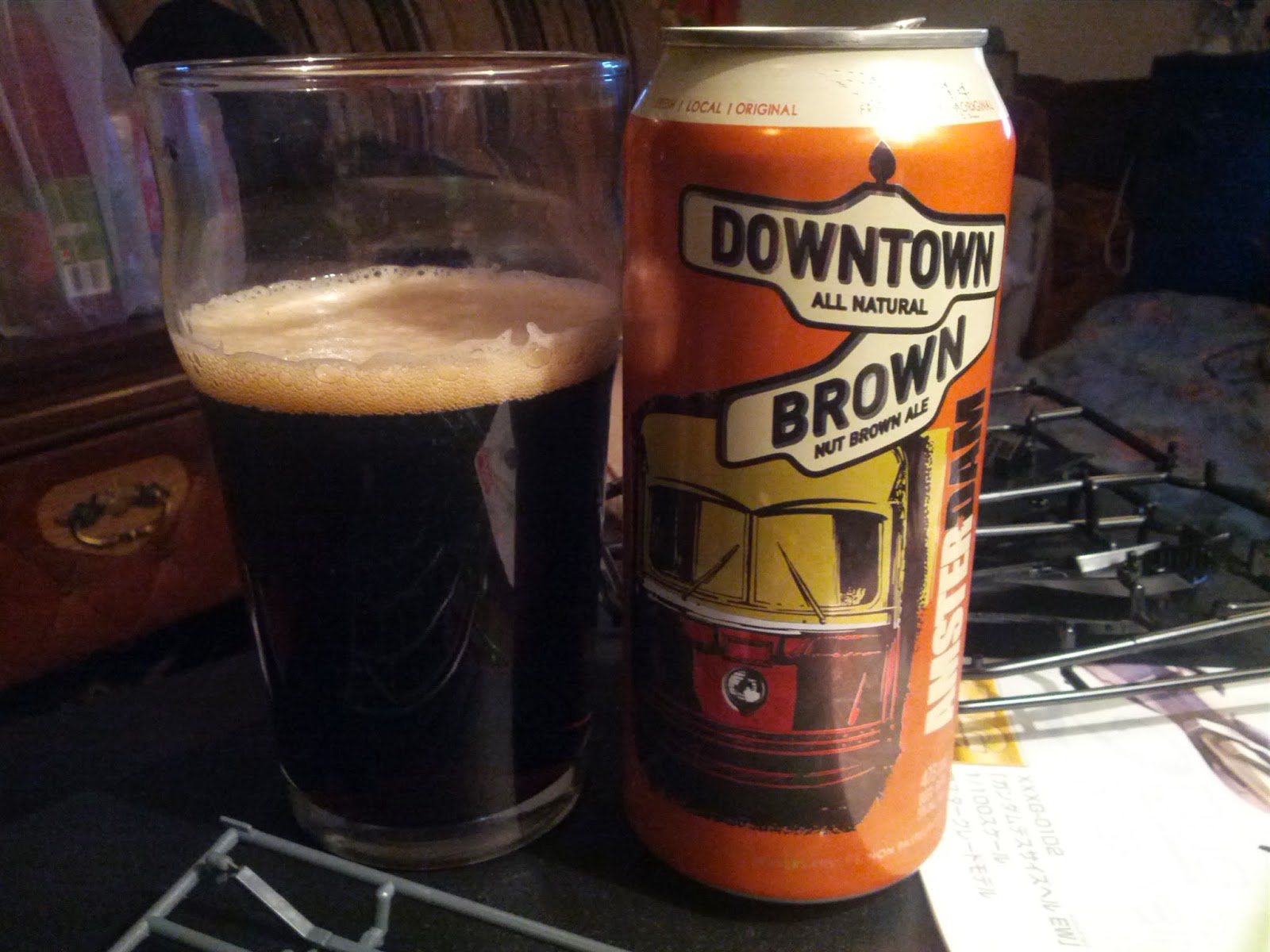 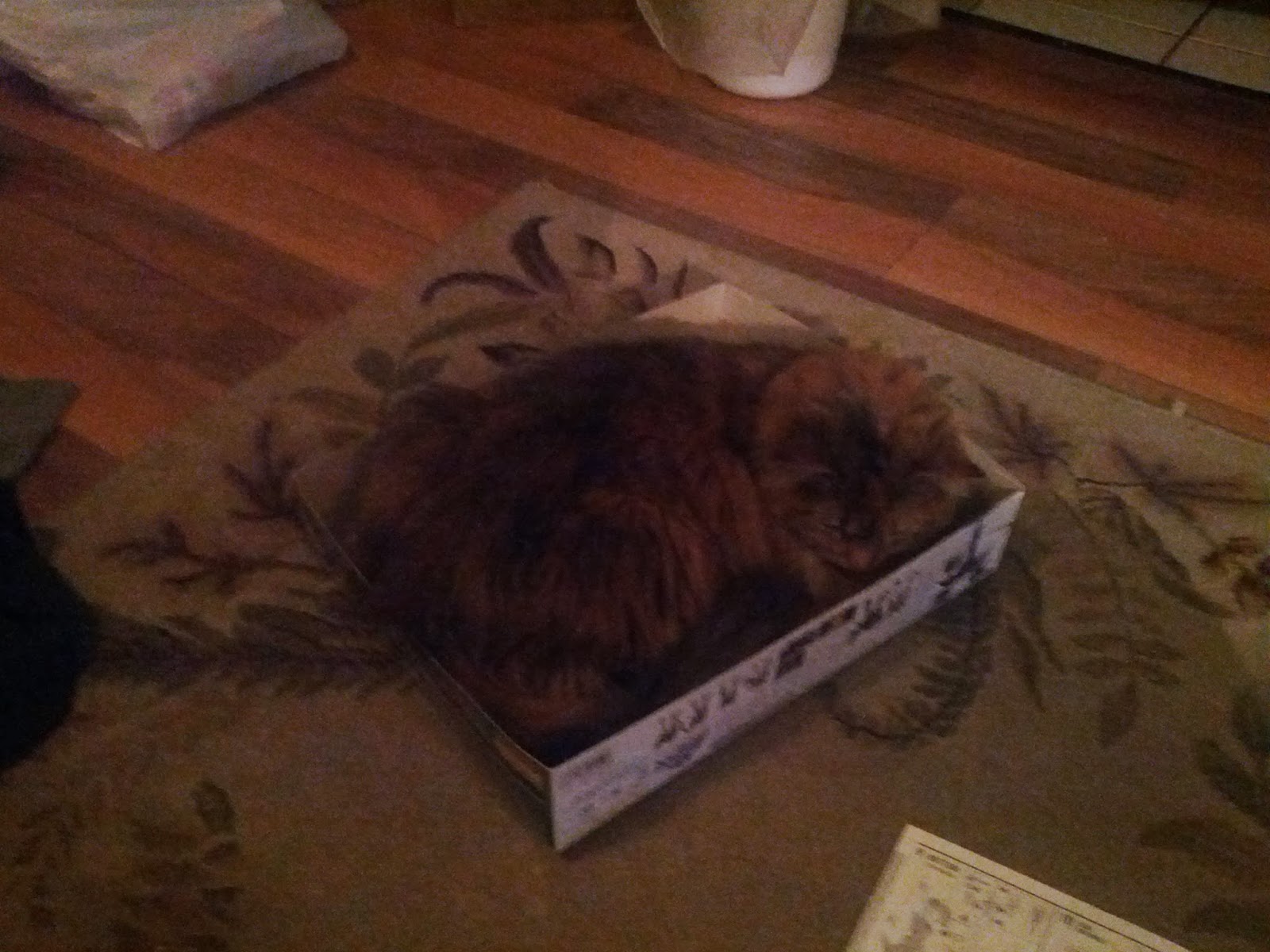 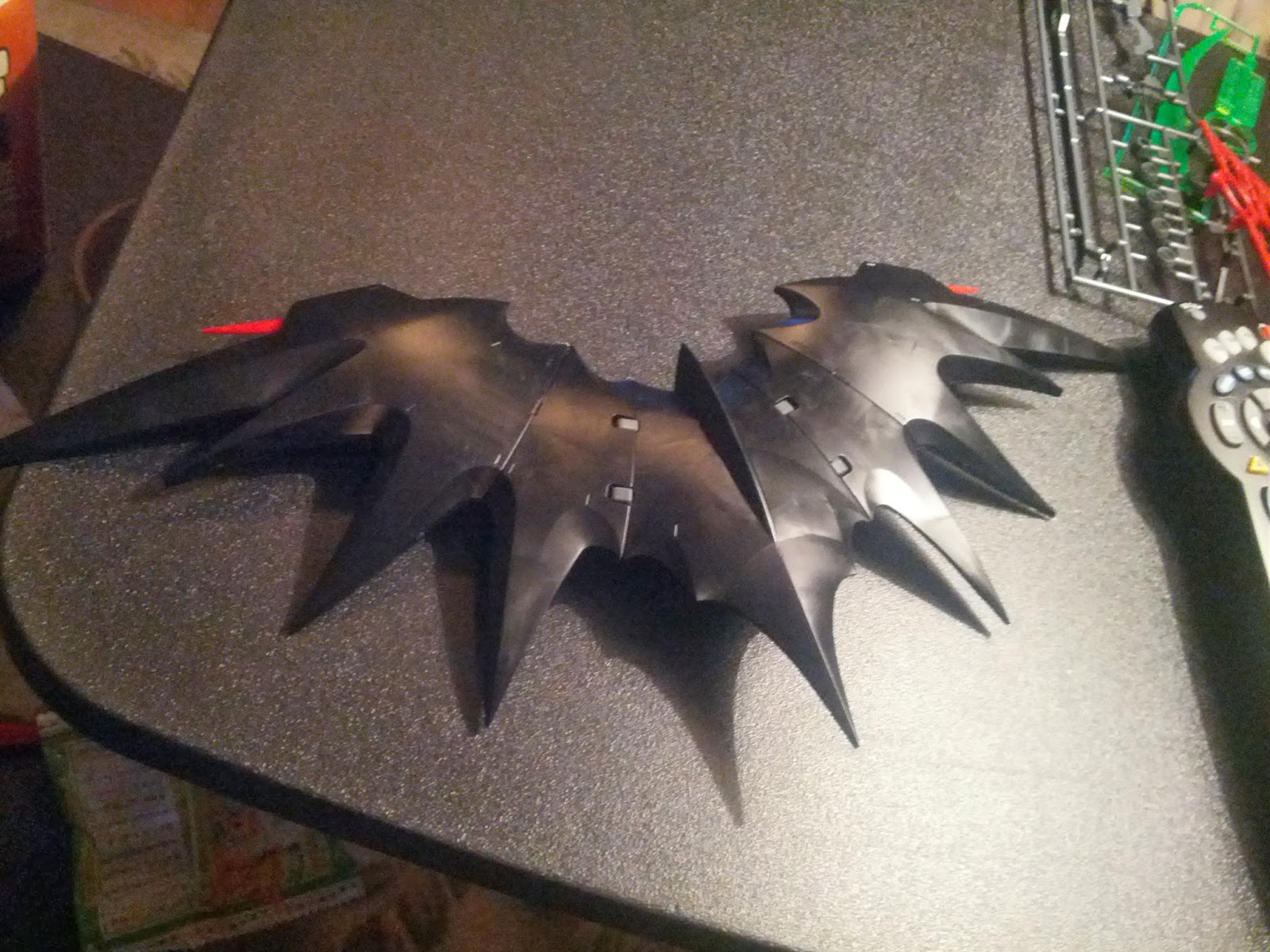 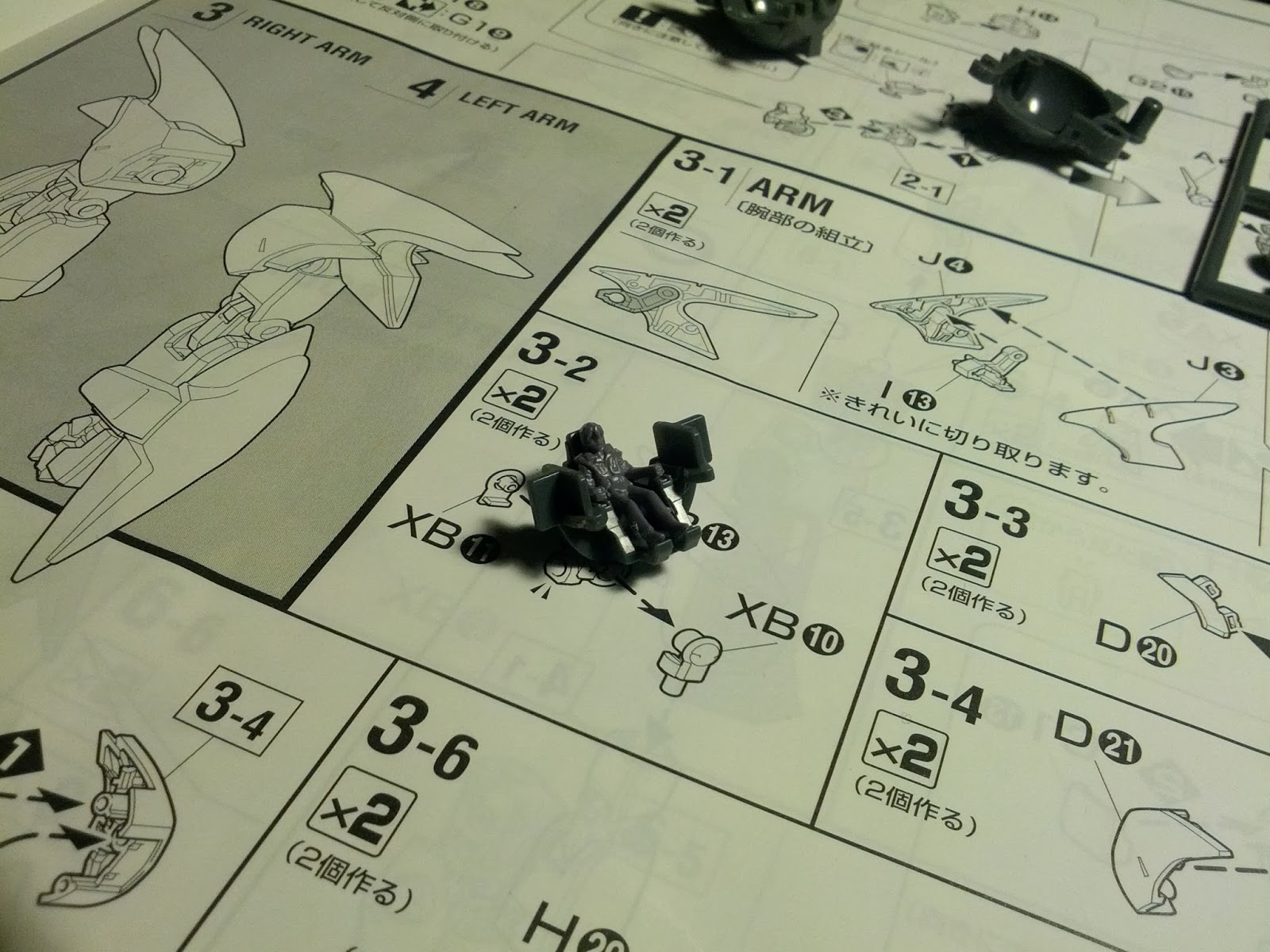 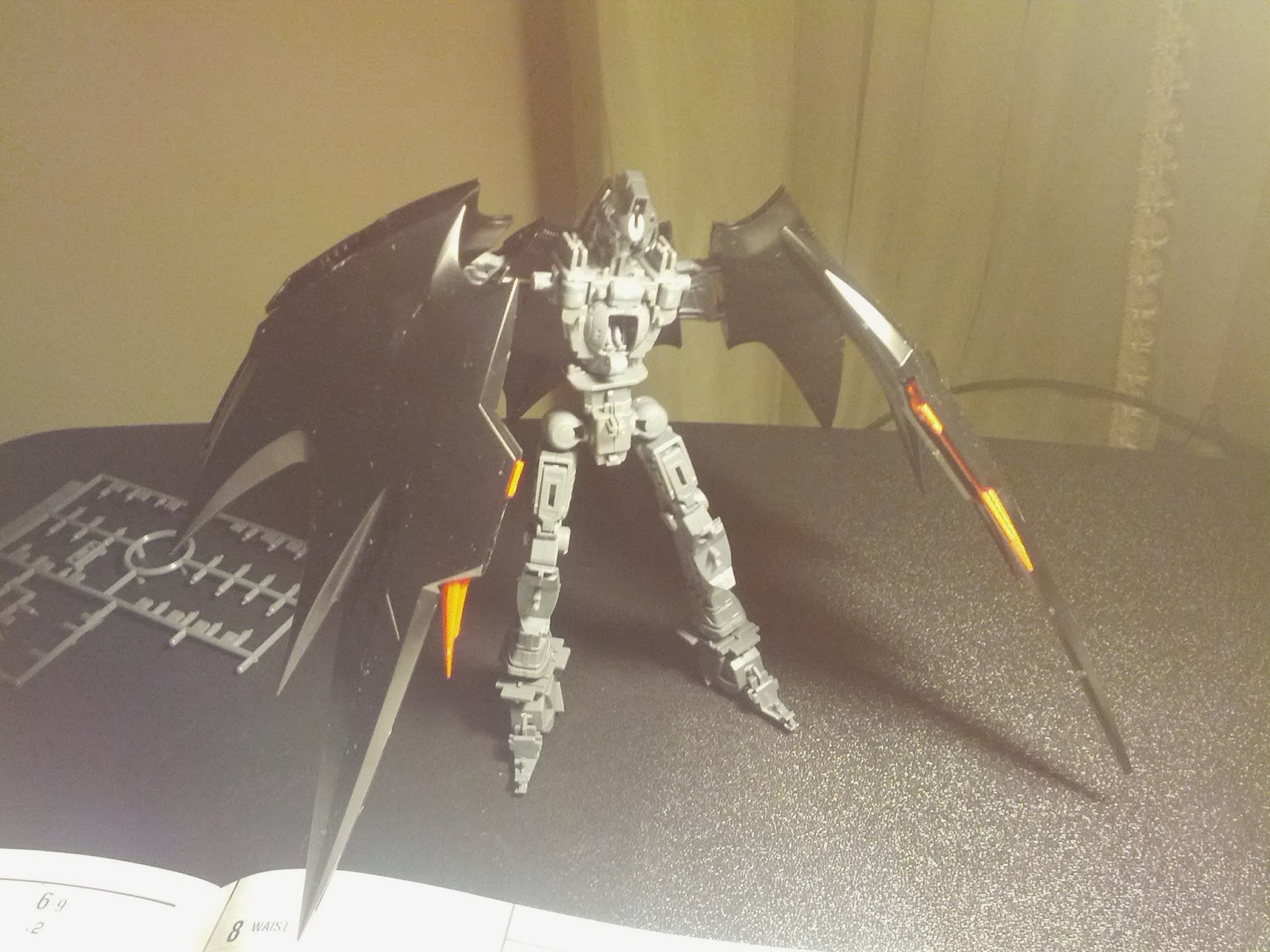 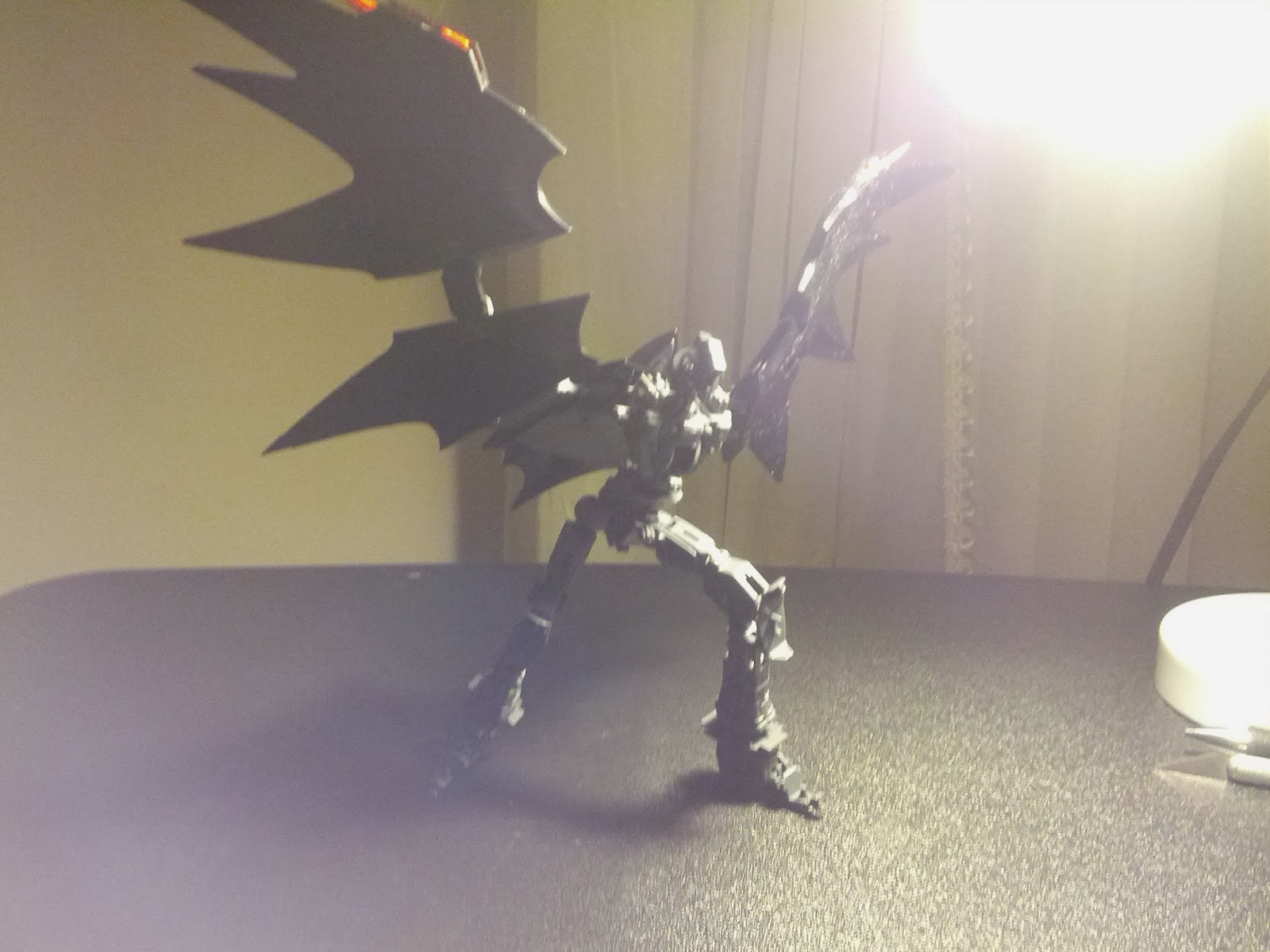 My impression so far is that the kit is pretty complicated and maybe isn't for beginners. It's a relatively new kit and design but I felt like it was about 20 years old sometimes while I was making it. Some pieces look the same but there are small variations between the left and right versions. Many small pieces come together to form larger more articulated sections and these have to be assembled with great care and attention to detail. A lot of newer kits are built with symmetry in mind and it's somewhat more forgiving. If two pieces look the same they probably are and can be used interchangeably. Not so with this kit. Proceed with caution. Take your time and pay attention.

So far I'm feeling rewarded. I plan on building the inner frame first to get an idea of the range of motion and articulation. And I just really want to play with it lol
at 2:08 AM No comments: Links to this post