A couple more shots of Strike Vermillion and Astray Strike Frame. Both models are incomplete. I still have a lot of work to do on both of them but for now this project is on hold and I'm moving back to my MG G04.

Tonzo mentioned in the last post that the katana on either side of the mech looks good as seen with the Astray Orange Frame and I'm starting to think that he's right on two points. One; in response to what I said about being a traditionalist and having two blades on one side of the warrior... He said that's true in the case of a Katana and Wakizashi but not necessarily a Katana and ANOTHER Katana. And I must agree. Two; there is the balance issue. The Katana/Wakizashi combination wouldn't look like how the Astray wears the double blades. It isn't that cumbersome and bulky (spoken with experience as I've done it myself on numerous occasions - don't ask.). I think it might be better if the Astray has a blade on either side... I mean it's not like robots are left or right handed right? And balance is more of an issue for machines... So... I can make the change and still maintain my principles haha

Without question the Astray is a bulky mech especially in comparison to conventional Seed designs like the Strike, Impulse, Freedom and so on. TheAastray looks like a football player next to a swimmer. But hey! We're all built differently right?! Just because he's bigger doesn't mean that he's not as effective or uglier! It's all perspective/opinion! I know a lot of guys out there who can't stand Seed's "anorexic" designs and like the Astray style a lot more.

That said... I like both of them. From the waist up I like the Astray but from the waist down I like the Strike... hey wait second... I wonder would it would look like if...

OK guys take a look at these pics, cause you won't be seeing these guys for while. In the meantime I'm going to try some 'experiments'. 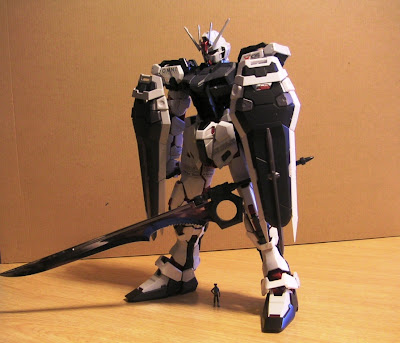 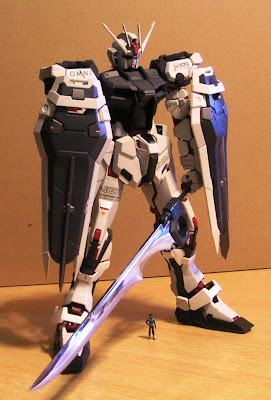 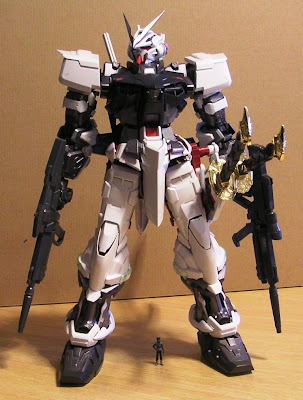 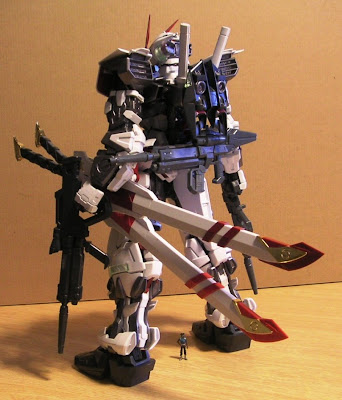 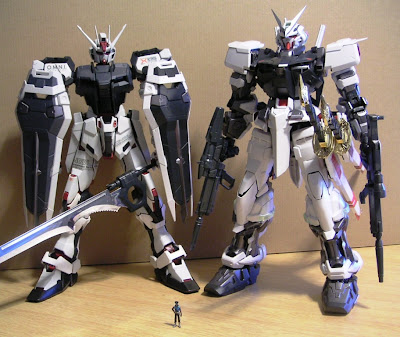 Had to leave 'Afro Samurai Gundam Pilot Double B' in the pics for scale. These are some tall war machines!
at 3:41 AM